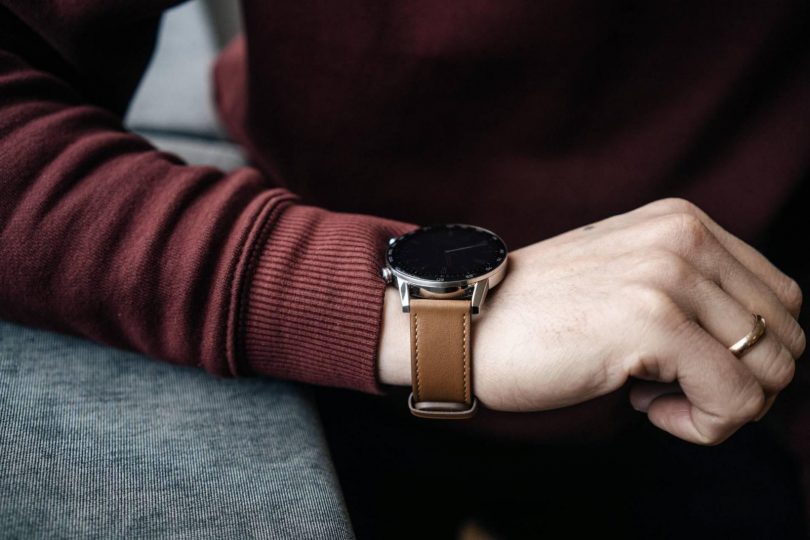 The watch, despite the functionality, is not only a useful gadget but also an accessory. The latter requires the devices under discussion to be beautiful. MagicWatch 2 has this order. The watch is available in a case made of steel type 316L – stainless steel. Their shape is round. Remind of a classic chronograph.

Honor produces two versions of watches – 42 and 46 mm. The first ones come only in pink peach colour and are the best option for girls and women. Large MagicWatch 2 come in glossy white and matte black. The former, as it seems to us, is a more classic version, while the latter is a bit more modern and universal. However, both have a silicone strap for sports and a leather strap for everything else.

Each version has two buttons on the right. But only the big one is decorated with a red contrast line. A small detail is an element of recognition. Pressing this button activates the menu. The bottom key is customizable. By default, it’s programmed to call up a list of activities.

Honor compares the design of its watches with the design of the dashboard of a racing car and calls it “sporty and bold.” It is difficult for us to refute this assertion or to agree with it since sports cars were not driven and there is nothing special to compare with. But we can say that Honor watches are stunning. Particularly pleased with the assortment of versions: there are feminine peach, and classic glossy, and more universal blacks. The latter, in our opinion, is the best. In this version, the black plastic cover from below does not strike the eye and does not stand out from the general style. 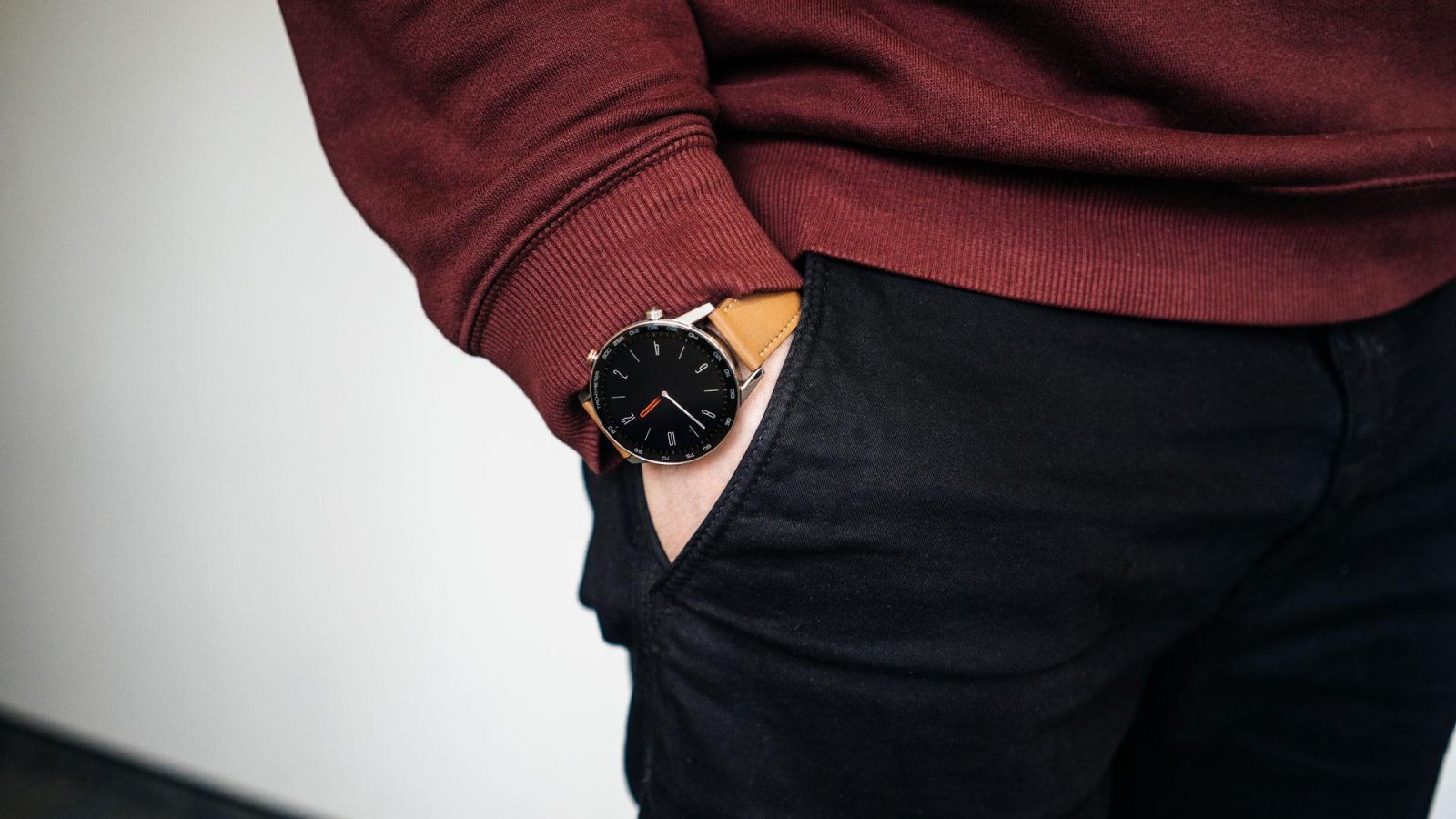 The most attractive part of MagicWatch 2 is the dial. Let’s start with the glass. This is a rather large “pancake” made of durable hardened material with a slight bevel around the perimeter. Thus, the screen of the new product can be called tridesh. They say, by the way, the Chinese cut out glass and grind it somehow in a special way – so that the process takes 15–20 minutes longer than usual.

Looking at the watch from above, you can find the numbers that are located on the outer ring of the dial, decorated with a different texture. This is a tachometer. A tachometer is one of the most popular complications among chronograph watches. It allows you to calculate the speed of movement or the distance covered. Forcing yourself to learn how to use it, given that the watch has GPS, is quite difficult. But, they say, if you overpower yourself, sometimes a tachometer can come in handy.

Let’s move on to the display. It has a diagonal of 1.39 inches. Resolution – 454×454. Density – 326 dpi. Almost like Apple. There is a light sensor, so the brightness is adjustable. By the way, she’s doing nothing at a maximum – she used the watch several times as an impromptu flashlight. Even a special option for this case is provided in MagicWatch watches. Since the screen type is AMOLED, there is support for the a la Always-on-Display mode.

The dials in the catalog of the sea – from the most minimalistic, with one arrow, to hyperfunctional, which even show atmospheric pressure. In addition, you can create your own dials. In general, customization in all fields. And yes … Since they hinted about customization. The straps also change. And AliExpress is already littered with offers for every taste and color.

MagicWatch 2 has a speaker and microphone (only in the 46 mm version). As a result, you can receive calls on the watch. And this is awesome. It’s very convenient, you know, to annoy annoying spammers without taking your smartphone out of your pocket. One thing: for only you to hear the interlocutor, headphones must be connected to the watch via Bluetooth. In addition to talking, an external speaker counts down and outputs voice commands in fitness applications. And on the clock you can listen to music without a smartphone. Through the speaker, the pleasure is so-so. Through the headphones – the suitability. 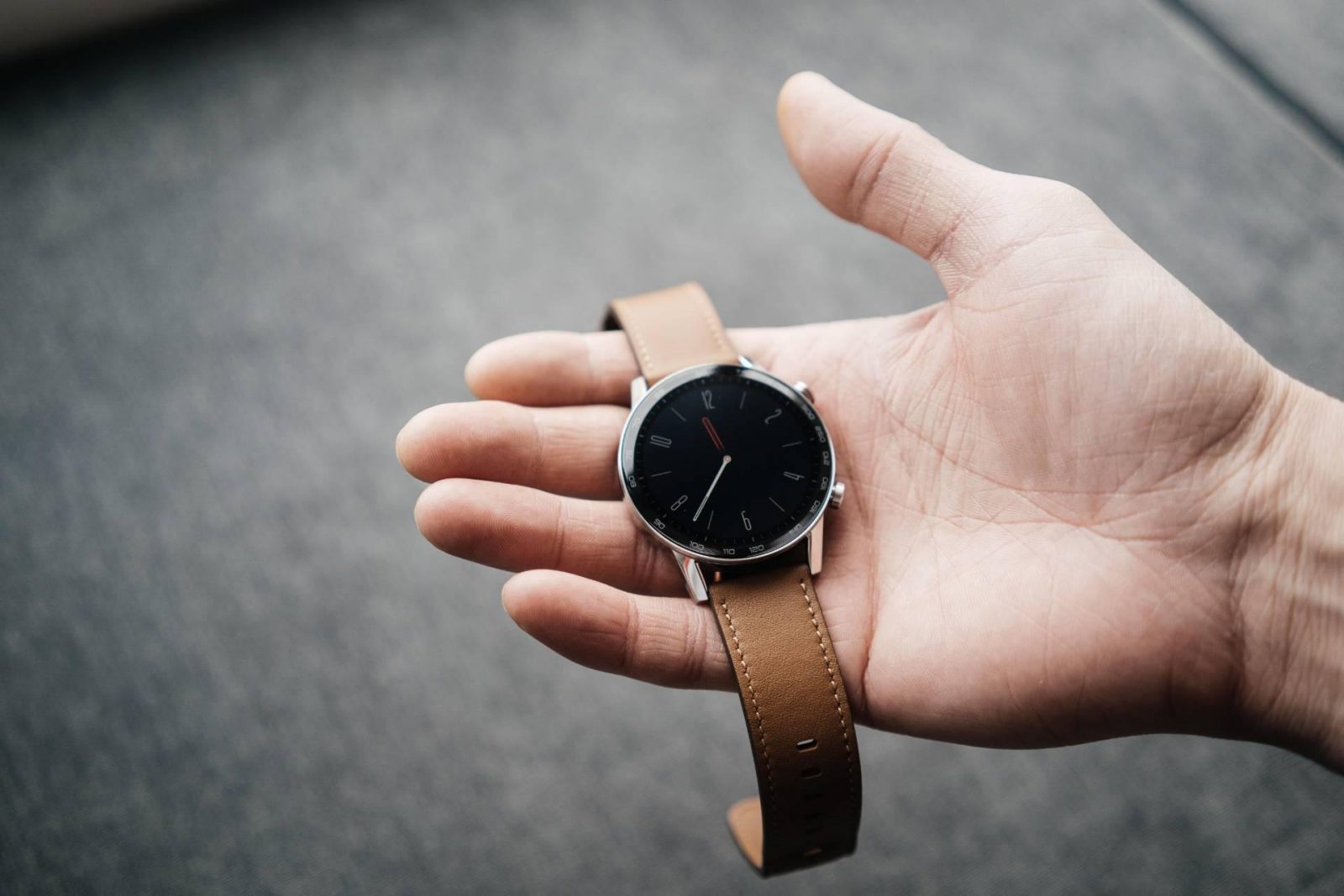 The new Honor runs on a Kirin A1 chip. According to the Chinese, this is the first chipset in the world based on the high-performance Cortex-M7 processor. It provides the Honor MagicWatch 2 with fast processing and data transfer, long battery life (at 455 mAh) and more accurate heart rate measurement with minimal energy consumption.

We understand that it sounds too glossy, in an advertising way, but it is very similar to the truth. The watch really works very responsive. The same music in conjunction with Android switches from the clock instantly, without delay. You can not say about fitness bracelets. 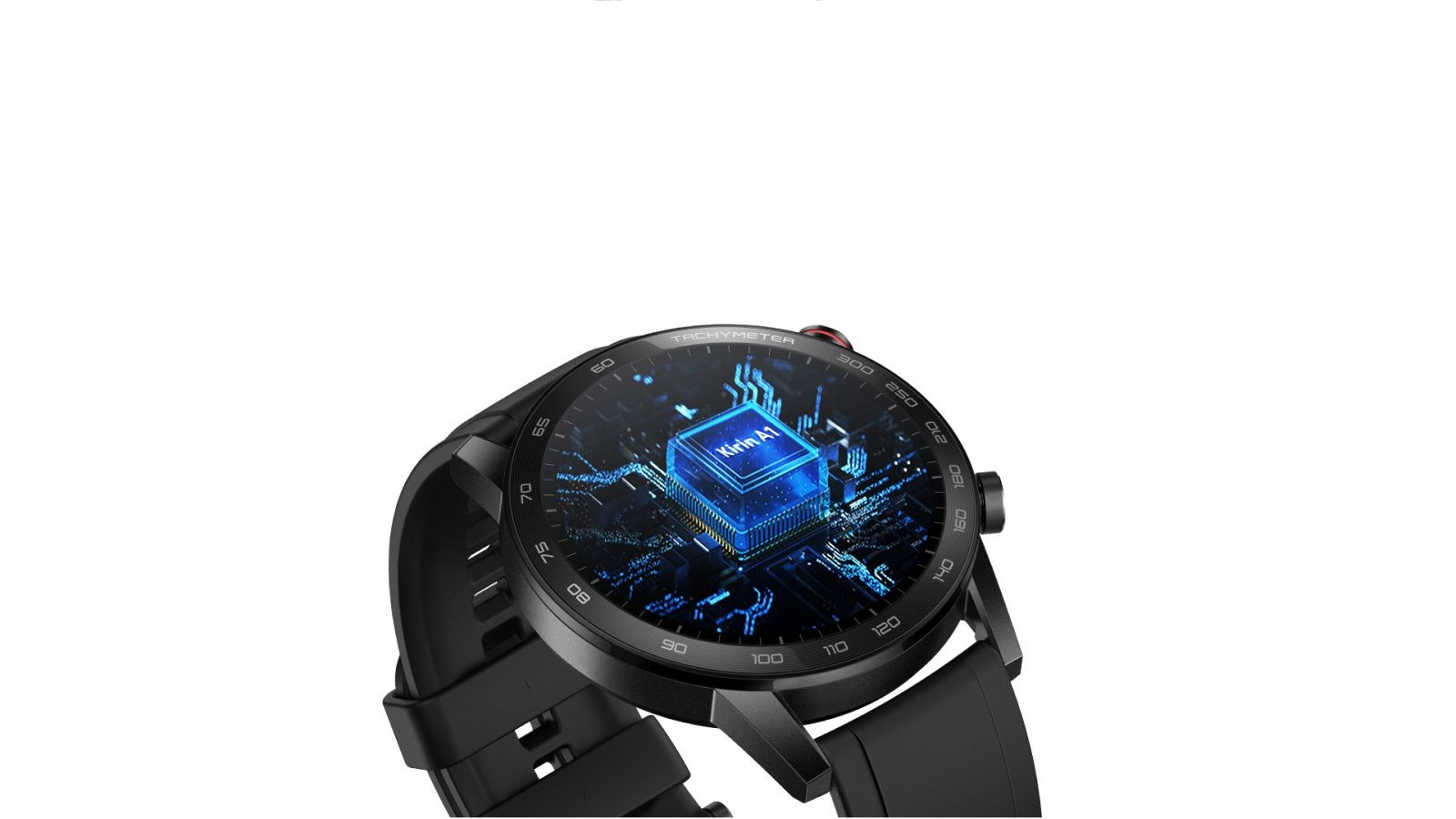 Autonomy is our respect. The vendor claims that on one charge, the watch can work up to 14 days. We stayed on average for 10–11 days, which is still impressive. We did not use the Always-on-Display analogue, but at the same time, the heart rate monitor worked permanently, and sleep monitoring was turned on every night. At least one owner of the Apple Watch was filled with burning tears when every second evening he put his watch on charge and saw that MagicWatch was discharged by only 10% in a day.

There are not so many sensors and sensors in Honor as in Apple Watch (there is no ECG and NFC), but more than in any fitness bracelet. Namely, an accelerometer and a gyroscope for determining the position and speed of movement in space, a magnetometer for a compass, an optical heart rate monitor for measuring heart rate, a light sensor for automatically adjusting brightness, a barometer for determining atmospheric pressure, and GPS / GLONASS for what’s apparent. 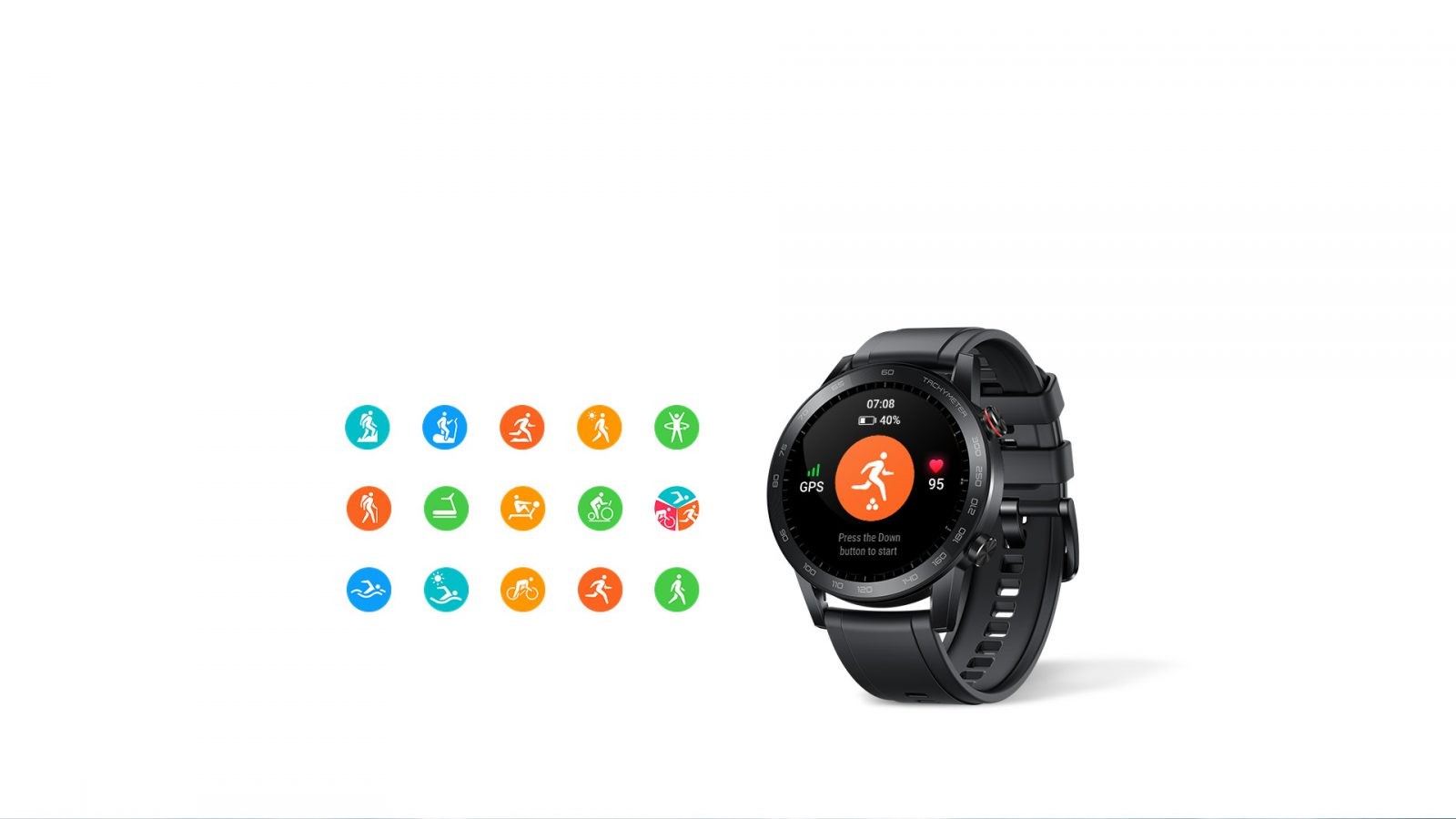 Of course, MagicWatch 2 has all the features of a fitness tracker. The watch tracks 15 different sports activities, eight of which are street sports, seven are indoor, including swimming (the watch is protected from moisture when immersed to a depth of 50 meters). Honor says it has set up programs with specialists from the Fitness Research Center in Finland.

We will also talk about the “stressometer” here called TruRelax. To determine the level of emotional stress, the watch analyzes heart rate variability and a minimum of input data (answers to 12 questions when the mode is first activated). TruRelax detects any changes in human behaviour. Several times during testing, MagicWatch recorded an average level of stress from the author. But here’s the trouble, he found out about this much later. But it was not possible to recall what could have caused the disorder. Therefore, it is difficult to assess this option. 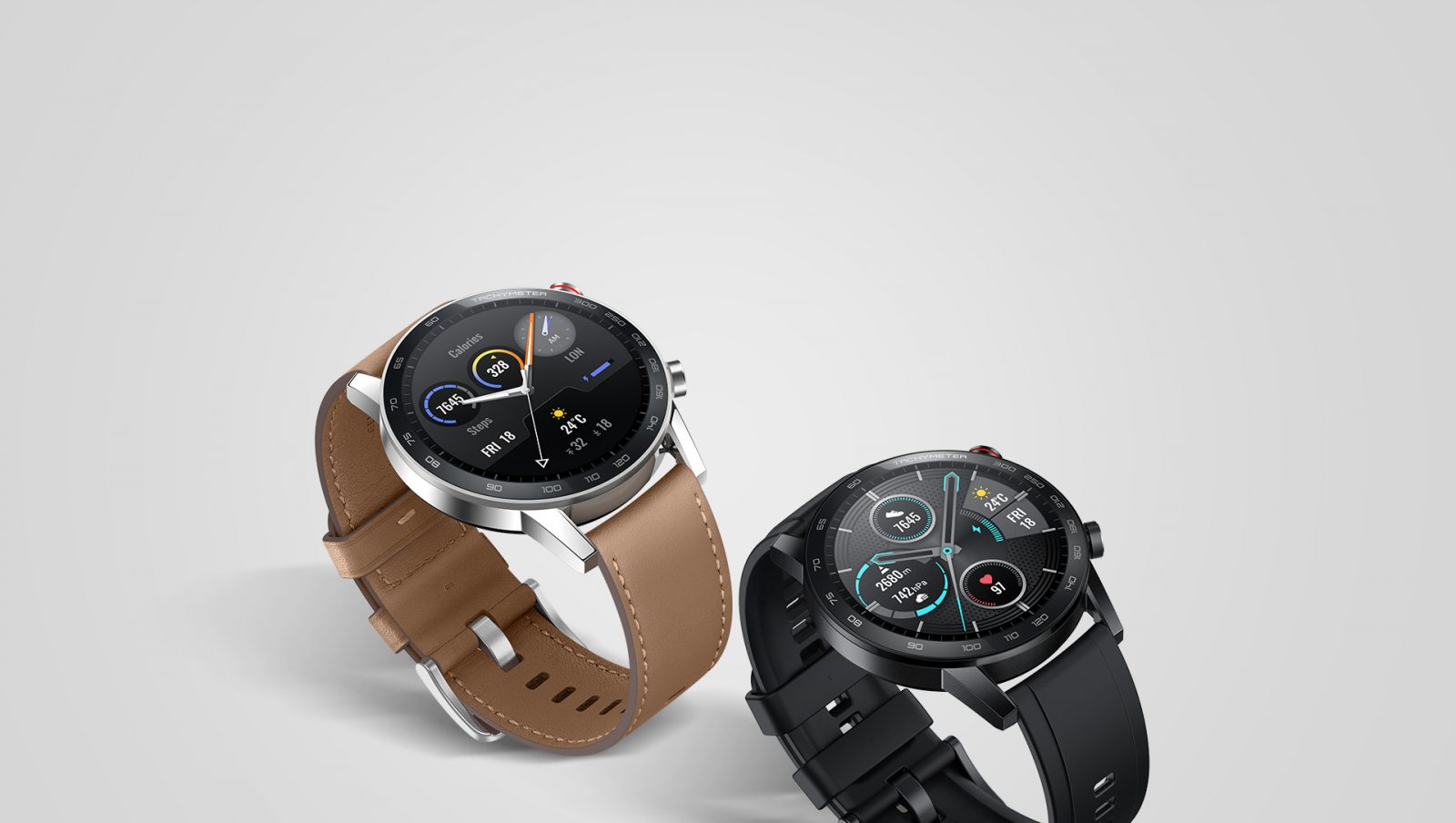 Described above mainly applies to the use of MagicWatch 2.0. And, as you can easily guess from the tonality of the description, the impression was positive. However, there is one tiny detail that is very upsetting.
Huawei and Honor recently very often talk about ecosystems. They promote this philosophy with the formula “N + 8 + 1”, where 1 is a smartphone, the central hub, 8 is a set of secondary gadgets (TV, headphones, computer, etc.), N is an infinite number of other smart devices. The Chinese are drowning for everything to work and “communicate” with each other with a half kick. Like Apple, for example you open AirPods – and the iPhone already screams that it sees the headphones and is ready to synchronize with them. In theory, the same should be with the Honor.

Let’s not say that “N + 8 + 1” works or, conversely, does not work, as it is written on paper. We will tell you how it was with us. We decided to use Honor MagicWatch 2.0 in conjunction with the Huawei Mate 30 Pro. We sincerely hoped to see the magic of the ecosystem with our own eyes, but this did not happen. Not only that, the Huawei smartphone did not offer to connect to the Honor watch itself, but even through the application they did not find each other immediately. Would it be different if both devices were the same brand? We don’t know. The Honor laptop, for example, had a wonderful conversation with the Huawei smartphone via the Honor Magic-link protocol.

And one more micro remark. No matter how strange the watches on Tizen and Wear OS may be, they have one big advantage – software customization. Wearable electronics on these platforms support third-party applications. In the case of Huawei, we got a polished to a shine, but still a closed and scanty platform.

Everything that relates to the appearance of smart watches, paired with the iPhone, they do not lose a bit. Moreover, which is extremely important for many iPhone users who are worried about their ego level and expression through an external gloss, Honor MagicWatch 2.0 attracts attention no less than the new Apple Watch. Watches look, as they say, more expensive than they cost.

Definitely a plus, as in the case of a colleague, we write down the energy efficiency of the watch. Forgetting to charge it is quite normal, because it is practically not required. Another thing is that after all, it’s in conjunction with the iPhone that you do not get the smartest watch in the world. Let’s just say that you get a too smart and too healthy looking fitness bracelet with several nice features for smart watches. For example, you can answer calls on the watch and make them yourself – the watch- is equipped with a distinctive speaker and a good microphone, the interlocutors do not always realize that you are talking to them through the watch. Plus, reading all the messages on the watch, and not just a notification of their receipt.

How can I summarize the experience of using Honor MagicWatch 2 on iPhone? Watches fulfill their main function – they reduce the number of contacts with a smartphone. And significantly. Thanks to the “Screen Time” function and constant wearing of watches, it was possible to find out that the time spent communicating with a smartphone is reduced by an average of 10-15% per week. Given that most people do not part with the smartphone screen for at least three hours a day, it can be estimated that two hours a week with the help of the watch is released. Nowadays, when there is not enough time for anything, two whole hours is a worthy weekly gift.

Despite these minor flaws, which only geeks and journalists care about today, Honor watches deserve the highest rating. Because, firstly, they are by no means ugly. Secondly, MagicWatch 2 is an excellent support device for a smartphone. This watch can work out many scenarios on its own, without using a smartphone. Third, the price. Honor asks for 139$ for its new product.

Among the mass brands, MagicWatch 2.0 has not so many competitors. And given the price they are not at all. Galaxy Watch Active2 – the closest competitor – is incomparably more expensive. It’s not worth looking at Apple’s counterparts at all if you don’t have an iPhone.